Confused whether to buy Samsung Galaxy A50 or not.

Want to know the real world hands on and in depth review, read on. 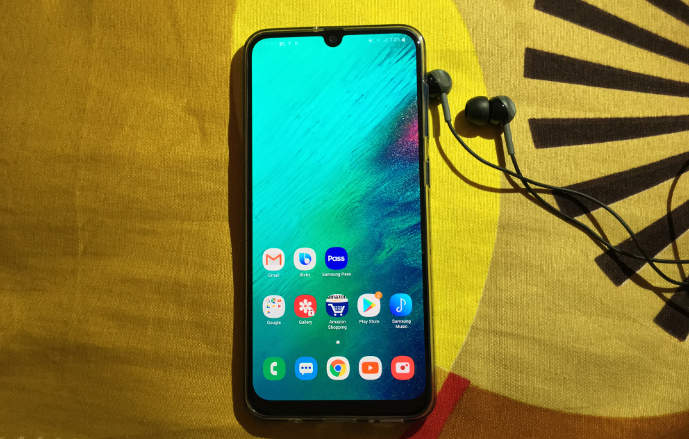 I have had the Samsung galaxy A50 for more than 2 months now and i have lots of positives as well as negatives to share.

I am sure, this Samsung Galaxy A50 review will definitely help you make that ultimate buying decision.

The instant hit M series targets the millennial while A series is aimed at the upper mid segment.

Flash sales have been running over 4 weeks for Samsung M30 now and that speaks for the popularity.

I have pointed out the really important A50 features for which we normally are interested in, for the tech nerds expecting full specs, head over to GsmArena.

Dedicated card slot, means you can use both of your sim as well as a memory card
along side.

No NFC (Indian Unit), No IP68 water and dust resistant

This Samsung galaxy A50 review digs on the points which i have been jotting down since i got hold of the device.

A50 is a pretty slim phone encompassing a rather impressive build quality.

My unit was creaking at the camera side when shaken.

I didn't notice this with other units so may be some issue with this production batch.

Rest apart, everything else is properly fitted together.

As shown in the picture below left side of the phone encompasses volume rockers and power button.

Samsung Galaxy A50 volume rocker[/caption] Right side of A50 holds a sim/memory card tray.

A50 hosts dedicated memory card slot and you can use both of your sim cards combined with a dedicated micro SD card.

This is one of things (SD card) Xiaomi and other brands (who use hybrids) needs to improve.

Some may argue in favor of hybrid slots, but consider, you have a hybrid memory slot and all your camera shots and personal documents are saved in phone memory and one fine morning your phone decides to malfunction.

Not only you risk to loose all the photos but also the service center guy can peek at your personal belongings.

A dedicated micro SD card slot solves the purpose, just set the default storage to SD card and you are good to go.

Of course a hybrid sim slot can also serve the purpose should you choose to trade a memory card for a secondary sim.

But you get the point, a dedicated micro SD card slot is indeed useful and Samsung A50 has it. 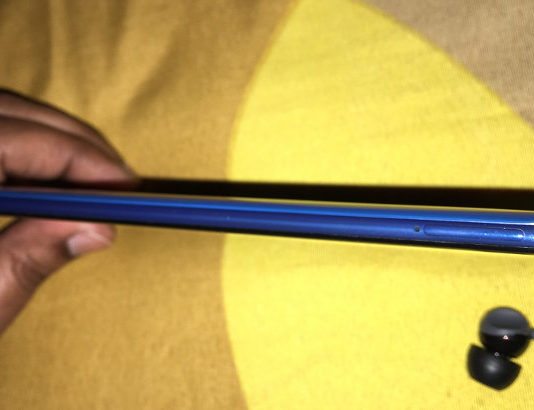 No, this phone is not IP 68 dust and water resistant, there's not even water repellent to talk of as opposed to Redmi 7/pro.

Previous years A series were known to be water resistant but Samsung decided to ditch it to make way for other newer tech like in screen fingerprint scanner.

So now we have a phone in which neither water  resistance works nor fingerprint.

Samsung A50 display is exactly what you expect from Samsung, no bluffing, this is the best display in the business.

With deep blacks and vivid colors, this Amoled screen will blow your socks off.

Screen is the area where you would spend most of your time on and this is a ride you never wanna stop on an Amoled display. 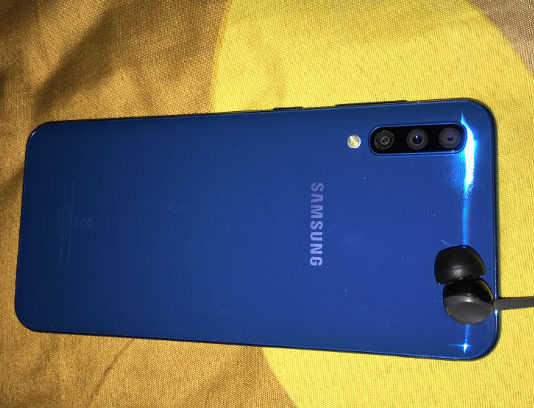 Camera performance is decent on Samsung A50 given the price bracket it sells at.

There is decent clarity in shots taken in bright light.

Wide angle mode on the A50 performs as expected giving you lots of real estate without going far enough.

Caution: Wide angle mode covers huge area but at the cost of clarity. 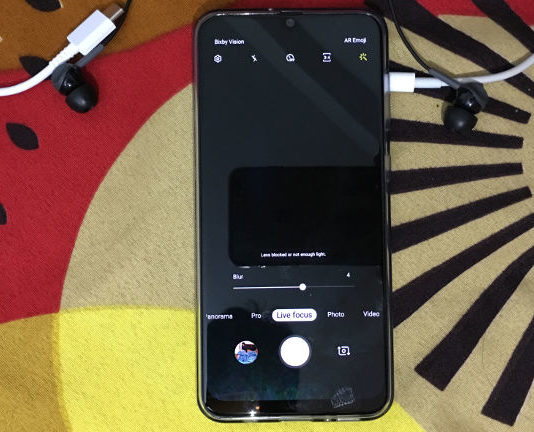 There's live focus for portrait shots, which can blur the background and you can set the amount of blur while taking the shot as well as after taking the shot, cool, isn't it.

Not really, at this moment, edge detection on A50 is somewhat immature on complex objects, but it's improving with regular updates.

Samsung A50 pro mode, which should be called as Kid's mode infact, because it's an insult to pro mode.

No pro options, except ISO and white balance, this is not whats expected at a phone selling at 20k price bracket. 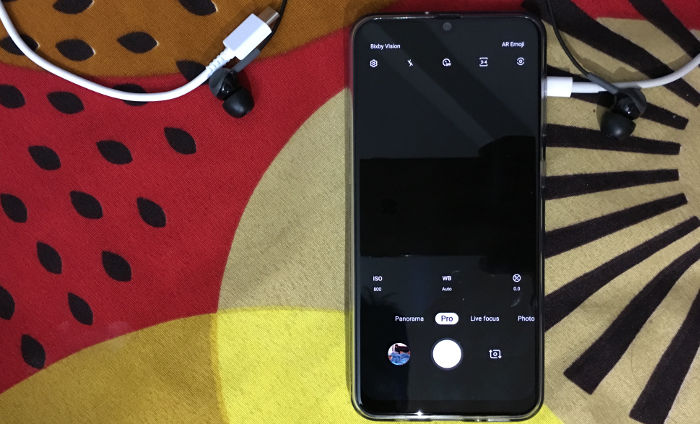 A50 camera performance is good at bright light, portrait shots with blurred background turned out with their edges mushed up lacking clarity.

Edge detection is something which would require to be fixed by Samsung via updates.

Zooming in the photos reveal terrible lack of detail. 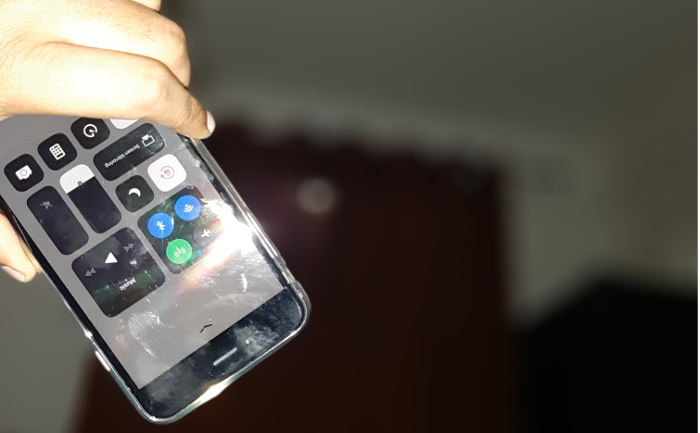 A Shot taken from A50

Edge detection once again takes the troll, but we believe this will be fixed with future updates.

Previous A series devices suffered from the same stigma which were resolved via software updates, so we can count on that.

Forget what the benchmarks say, the processor in Samsung A50 doesn't disappoints.
PUBG runs smooth at HD.

Day today tasks and multitasking is a breeze without any hiccups.

I tried opening 4 applications side by side and it did not overwhelm the processor and everything ran smooth ever after that.

I constantly open almost 11-15 Chrome tabs with 4-5 tabs on Firefox and the phone performs smooth like a smoothie.

Tabs do reload data due to insufficient 4 GB ram but full points to the CPU Exynos 9610.

Android Pie with One UI: 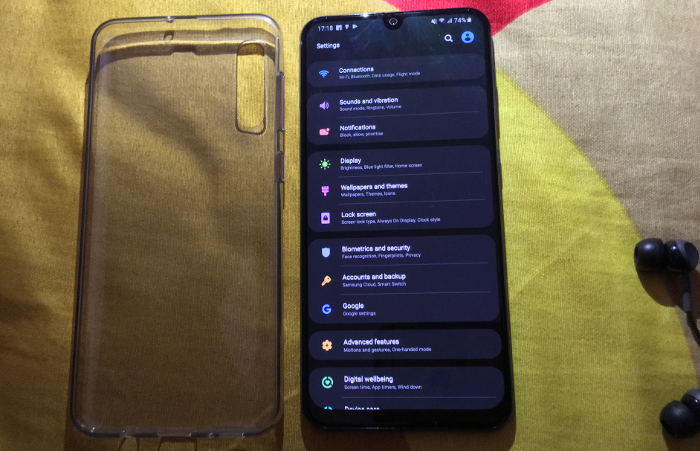 One UI on Samsung A50 is awesome.

Having used many different brands and different user interfaces, I've got to admit, Samsung UI, although tad less snappy, is functional and user friendly in terms of features.

One UI takes this functionality ten folds higher and presents a fantastic user experience to the user. 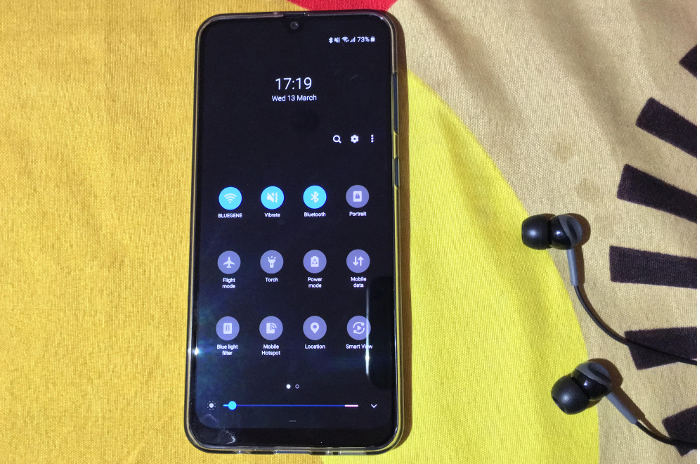 Whats Good about One UI?

Samsung has also added night mode, and its a delight to use on the amoled screen.

On amoled screen, the black pixels of the screen are actually powered off giving you the best black display possible.

It's insanely beautiful and you need to see it to believe it.

Whats bad about One UI?

But there's something here as well to frown about, few menu settings are so hidden underneath, that you need to dig a lot to get there.

Apparently it seems the world is heading towards iOS way where menu items are terribly messed up.

Samsung has put in extra efforts to facilitate one hand usage.

Action menu items appear below by default for easy access and you can easily reach out for that search bar as well.

As it stands today, it's almost customary for every brand to smash their UI on top of android, no matter how horrible it's experience is, (Vivo I am looking at you).

On the other hand, Samsung one UI does not exist for the sake of existing but it's there to make a statement and it does.

Samsung A50 audio quality through the single down firing speaker is just satisfactory.

It's not disappointing though and gets the job done but ain't something to be excited about either.

One more point to consider is that, changing volume does not happens with fixed intensity.

Lowering one bar at a time will have more effect than the other one, this is irritating when you don't want the max volume but don't want low volume either. 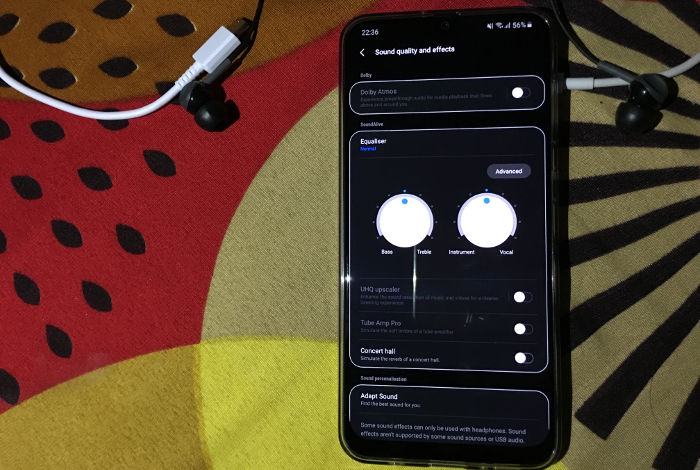 It could had been better though.

My age old galaxy grand 2 which retailed for the same price as A50 had million times better sound output, clarity and enigma than this one.

There's the fancy Dolby Atmos feature, which is alright but nothing exceptional.

In my observation, all it does is making the music mushier pushing clarity to the back seat.

Audio output is warm but towards the flatter side of spectrum.

It lacks sound stage and instrument separation is below satisfaction.

Serious audiophiles will feel disappointed but overall this is not bad if you need something while commuting.

Note: Samsung's M20 has a better music output and clarity when compared with A50.

You hold your shiny new phone and wanna try the new sensation everyone's talking about.

Of course you would be excited to try out that shiny new technology invention, yes that in screen A50 fingerprint scanner. 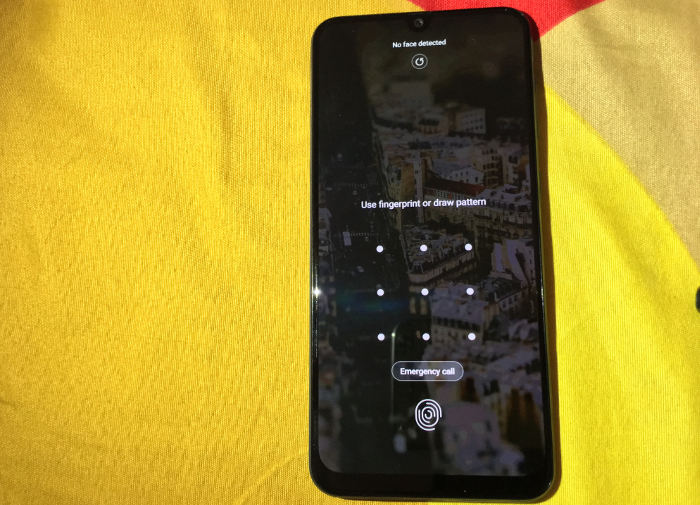 Well hold off, because although good it sounds, it highly under performs.

It's mostly a hit or a miss scenario. Reason, it's 1st gen, which was experimental and bad.

Even when it works, it's too slow and it takes away all the fun.

Irrespective of the lighting condition it unlocks the phone instantly, even before I could reach for my fingerprint scanner. 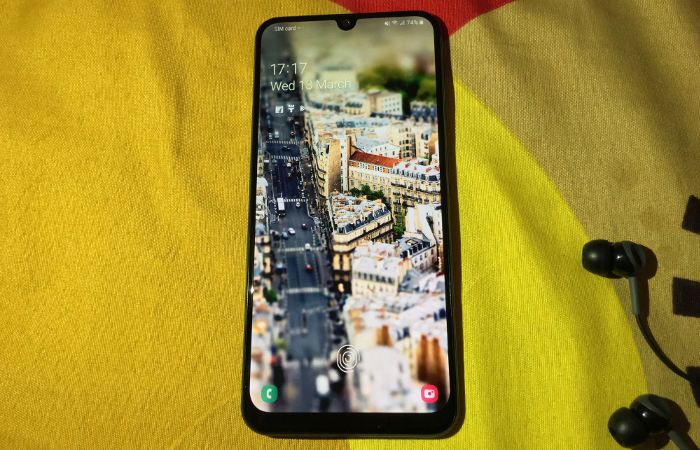 This Samsung galaxy A50 review covers all the point which you need for daily usage of your phone, as this has been my go to phone for past 6 months.

All the points were curated keeping in mind the obvious questions which you might seek answers to.

While this is a good phone but this A50 review won't be complete without talking about it's alternatives/competitors.

Especially, when there are many alternatives in this segment and at a much better price.

They are touted to be water and splash resistant as well.

But they lack Widevine L1 certification which all the  A series possess.

For the uninformed, widevine L1 certification allows the device to stream youtube, netflix and others at full HD full screen.

Realme 3 seems promising but suffers the same fate. Samsung M30 seems to be a better match in terms of features and has Widevine L1 certification too.

M30 has different spec camera but the difference in quality is not too wide.

It has 5000 mAh battery and has Amoled screen as well.

It may not match the Samsung Galaxy A50 features list, but it seems to be a better product overall, especially when the A series lacks ip68 dust and water resistance.

Given the price point and the market trust Samsung enjoys, A50 is one of the best devices out there with a decent enough camera and a gorgeous screen.

The processor is no slouch either, which makes this a great device to buy.


Small advice - A smart phone's screen is the real estate where you spend most of your time on, combined with other factors like camera and processor, and Amoled screens will give you the mesmerizing experience which no other brand or smartphone will ever match and that itself is good enough a reason to at least give this beast a shot.


Hope this Samsung Galaxy A50 review helps someone looking out to make a decision. 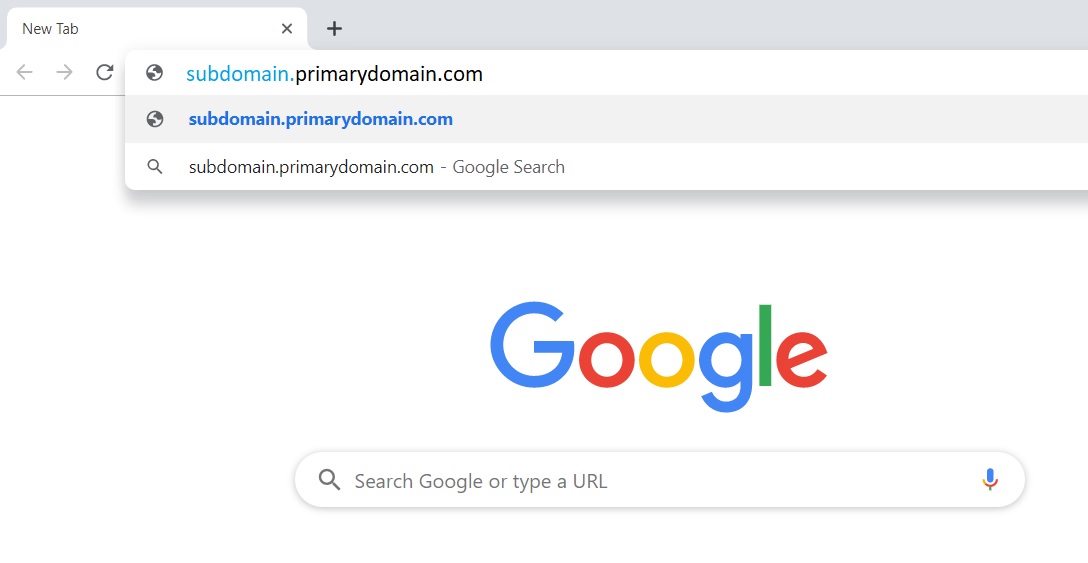 Creating subdomain without hosting is a topic which i found very less material on web.

I remember, I had to search a lot to find the relevant information.

Creating a subdomain through hosting using cpanel is easy and there are a lot of material available on the internet.

Which is why i decided to make a complete tutorial of making multiple sub domains on GoDaddy withiut hosting and link with blogger.

What is a Subdomain? A subdomain is a domain which is a part of a larger domain and in this case your primary domain.
Why SubDomains? A note before we start, you must already be in possession of a primary domain with any of the domain registrars.
Your domain could be MyPerfectDomain.com or anything which depicts your blog/website.
Now coming to the question why subdomain?
Assume you have a primary blog/website named myperfectblog.com where you write about some interesting topics.
Now you want to expand your work and venture in a new category, health.
You now have two choices…
Read more 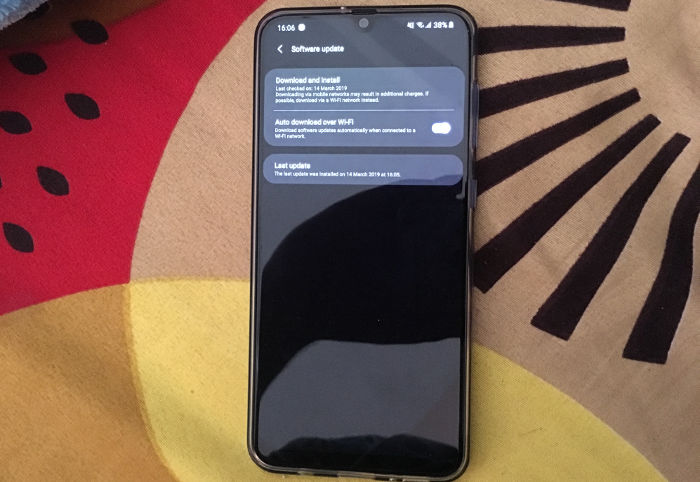 So, finally it's here folks, Samsung's rolling out the much awaited A50 camera update on 14th march, 2019.
Although the camera on Samsung Galaxy A50 is pretty good but it still didn't justify it's price bracket. The update is roughly 136 mb in size.

Also finger print reader feels much faster now, it's not in the leagues of ultrasonic sensors available in Galaxy S10, but it's better than what it was before.

In case you haven't upgraded yet, it's high time that you do.
Read more